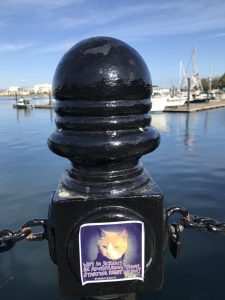 Why So Serious? Be adventurous today starting right meow!

After deciding to not breathe smoke and dodge fires on the Selkirk International Loop, Mary and I decided to return to southern British Columbia and ride a 450 mile loop on both Vancouver Island and the Sunshine Coast. As it was the last two weeks of September, what started in warm sunshine, ended in cold rain – truly a Tour of Two Seasons!

We embarked on our usual Coho Ferry morning trip to Victoria, British Columbia. This passage always enthralls, mainly as we leave the 2nd world despair of the US and enter the first world free country of Canada – and the attitudes and culture change is noticeable. After making it through customs and erroneously riding along the waterfront boardwalk (not allowed) we headed to our favorite breakfast place, Molé. Since last year, the street in front of the cafe now sports a new bike lane and bike parking – plus additional bike specific signals when traveling over the bridge to the Lochside Trail – how wonderful! 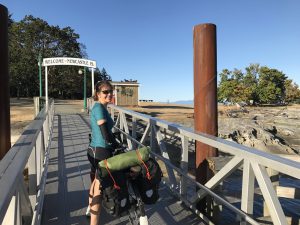 Our first night was at Ruckle Provincial Park on Salt Spring Island, truly one of the most beautiful places to set up camp. Though my favorite site was taken, we still had an amazing spot along the shore to watch the ferries and sailing ships. Felt good to be underway at last.

Having read about a unique place near Nanaimo, the next day was all about finding – and getting to – the relatively unknown Newcastle Island Marine Provincial Park. No one we spoke to knew about it, but we managed to locate the small dock and water taxi that would bring us there. We had to unload bags and squeeze into the little boat, but the trip across the bay only took 10 minutes and we stepped into a magical place. It took  some exploring to find the right campsite, but it was perfect and we were treated to a gorgeous sunset to boot. 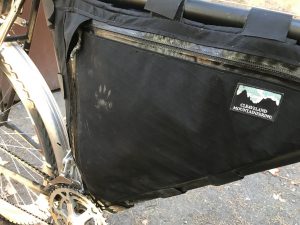 In the night, a raccoon unzipped my frame bag and tried to make off with my Indian scarf, but I thwarted that little thief! The camp sites have “raccoon boxes” and I highly recommend putting everything in them, including panniers and cookset.

The next day’s goal changed along the way and we opted to camp at Rathtrevor Beach Provincial Park. We met a nice guy who was also touring named Steve and near him a rather twitchy dog who seemed to lunge whenever Steve walked past the campsite. Oddly, it never did that when we walked by, so must have been something about him the dog disliked? There were numerous rabbits roaming around the park and in the morning enjoyed a beautiful sunrise. A chance meeting with another biker gave us good insight and a map for Denman and Horby Islands, our next destination. 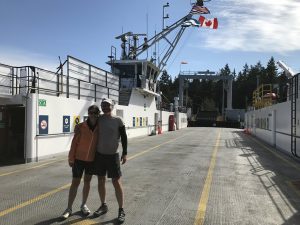 British Columbia is the land of ferries, and our trip utilized many of them along the way. On the ferry from Buckley Bay to Denman Island, we met a woman who encouraged us to camp at Brad’s Dad’s Land Campground, which I had never heard of, but we decided that it was worth finding if it was really “all that”. After stocking up at the village store on Denman we rode up the most brutal hill, easily an 18% grade and totally ignoring other biker’s warnings about it…simply because Mary decided we should just do it anyway. She ended up walking it by the way…but is also the one to normally beat me to the top of every single climb.

A second ferry took us over to Hornby Island – and we had the entire boat to ourselves! A short hill climb to Brad’s Dad’s Land Campground and it turned out to be truly a magical place and well worth the $25/night.

Upon waking, we could see that the weather was changing with strong winds and the threat of rain. Today would be a long one up to Comox and over to Powell River, with three ferry crossings. The moment we stepped back onto Vancouver Island, the rain began, and by the time we arrived at the terminal to Powell River we had been lashed with high winds and torrential rainfall. The tiny waiting room at the terminal was filled with wet motorcyclists on a supported tour, taking all the seats and pampered with dry clothing and snacks…we stood dripping wet between the payphone and the bathrooms for two hours…wheee. 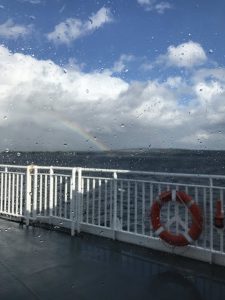 Rainbow off ferry to Powell River

A raucous ferry crossing with high winds and heavy seas caused a little consternation for some, but we made it to the mainland without getting seasick and headed 16 km south to our Warmshowers host. As a Warmshowers host all this summer, I had never been a guest until now – and amazingly Megan had only been a guest till this night so we both shared a new mutual experience! It was so wonderful, Megan and her Mom were so kind and generous; Indian curry dinner with fresh apple pie, hot showers, a dryer for our gear and comfy beds. Thank you Megan!!

We headed out the next morning planning on making it to Roberts Creek Provincial Park for the evening. We knew the day would be a bit challenging when we missed the ferry to Earls Cove by minutes and had to lounge around the terminal for two hours. Luckily we had the waiting room to ourselves and some sunshine. The route south becomes ever more hilly and after relentless climbs we arrived in Sechelt, where I was ready to find a motel and stop the madness. Mary wanted to continue, so we headed out for another round of climbs. As it was getting dark, we arrived at Roberts Creek Provincial Park – but it was closed!! Ack. Then, miraculously, a beautiful woman with long red hair came pedaling along with her dog running alongside and I flagged her down to ask where we might stay. She pointed us to Up The Creek Hostel a few kms away in the village of Roberts Creek.

The proprietor Martin had just returned from England and got us all settled in, though we opted to camp in the yard to save some money ($15/night). He gave us directions to walk down to town where we ate at the magnificent Gumboot Restaurant (not to be confused with the Gumboot Cafe next door, they are not related oddly). Such a wonderful meal and wine, though as we left the rain had begun and by the time we made it back to the tent we were thoroughly soaked – and the rain kept getting harder all night long. It was so loud that sleep was difficult – we should have bailed for the porch but didn’t. Upon awaking, everything we had was drenched, so we just packed up and rode to the ferry that would take us to Horseshoe Bay. 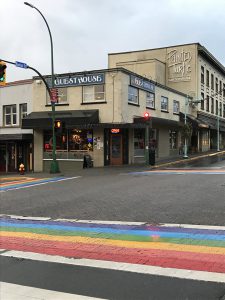 One noticeable aspect of riding in BC is the lack of mileage signs – and the lack of named signs to ferry terminals, which are always something other than the towns they are near – for instance, the terminal outside of Gibson is called Langdale, but no sign says Langdale until you actually get there. A bit disconcerting if you’re not quite sure you’ve chosen the right terminal for your destination – some have multiple options. A nice couple helped us find the correct queue and get our boarding pass – a free ferry ride? Of course!

At the West Vancouver Horseshoe Bay terminal we merely rounded a corner, stepped out of the gated area, bought  tickets to Nanaimo and came back to the same place to wait for the boat. Pretty easy that one. The crossing was uneventful and we played some cribbage along the way, our new pastime. In Nanimo we headed for the Painted Turtle Hostel which turned out to be a good choice with yet another storm coming in. The place was filled with travelers young and old, and the manager put our bikes in locked storage for the night. After a shower we went out looking for either the Indian or Lebanese restaurant we heard about…but had no luck finding them. On a whim, we strolled into the Old Quarter and found the most amazing, wonderful place called Astera’s Greek Taverna. Even as we walked toward it a gentleman in a suit came up and told us to be ready for a 5 star dining experience – he was so excited! And he was right. We entered the bustling, steamy, packed place – and yet were seated in under 3 minutes with no reservation…amazing. The food was exceptional – roast lamb, moussaka, spanakopita, dolmades, calamari, greek salad, rice, potato, vegetables, tsatsiki & pita – and enough for breakfast the next morning too! 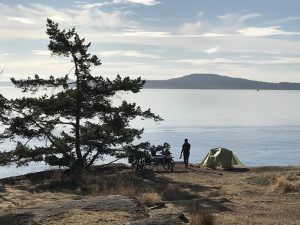 Though it was cool and cloudy in the morning, the day improved greatly till we were again bathed in sunshine. The shoreline from Ladysmith through Chemainus with its murals was a really lovely route. We took some quieter off highway options and the trail we’d found on the way up so the ride to Crofton was easy, but we missed the ferry by 1 minute and had to sit in the sun and play cribbage for an hour, not so bad. Met a couple from Alaska on a long tour who had just recently started, but they were full of energy and barely loaded – ironically we’d see them again as we were heading into Victoria the next day. We arrived at Ruckle Provincial Park again, and this time had a neighbor and his very friendly dog to visit with, along with a very bold raven. 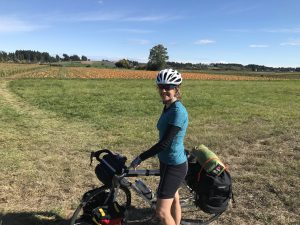 Our final day was spent leisurely riding to the Fulford Harbor ferry dock and enjoying the sun, though it was noticeably cooler than 10 days earlier. Mary found some birthday gifts for friends, then we hopped the boat to Schwartz Bay. For lunch we stopped in Sidney to sit outside and enjoy the warmth. Further south were the pumpkin fields – luckily this time we mostly missed getting wet from the irrigation spray. Upon entering Victoria, we stopped at MEC to stroll around and the bike shop was kind enough to watch our bikes, so we gave them some chocolate in thanks. A nice early dinner at the Irish Pub with curry poutine and calamari to celebrate the finale of a great adventure.

We caught the final Coho Ferry to Port Angeles and watched the beautiful skyline of Victoria, British Columbia fade into the sunset. All told, we were on 16 ferry trips, most of any trip so far. Can’t wait to return! 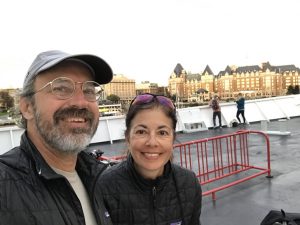