To Tri without Training

“You need to tread water at the start.” What? What does that even mean? I diligently listened to the guy with the megaphone who went through the race details. About half-way through I had no idea what he was even talking about. “T1”, “timing chips”, “waves” (the water looked calm to me), it was all rather bizarre. I had only committed to doing this event about one hour ago and now here I was standing in the midst of some serious-looking half-naked people at the water’s edge. 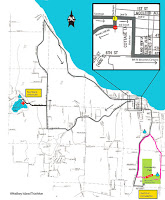 Goss Lake on Whidbey Island…the start of the 13th Annual Whidbey Island Triathlon. I had been here before as a spectator and support for my wife in 2008 and it all seemed sort of jovial and intriguing then; so much so that I flippantly mentioned I may be up for trying it next year, and not surprisingly my wife Carrie signed me up 6 months ago, which seemed like more than enough time to prepare. Now treading water over my head, and waiting for what seemed much too long, I flailed in my little yellow rubber swim cap waiting for the horn to signal the start of the 4th wave – “old guys and everyone else.”

To preface all this, preparing for big events is not out of my ability, and getting physically prepared for arduous events is not something I am unfamiliar with. Of course, they have all been single sport endeavors revolving around cycling. I’m a randonneur, used to long periods of riding through every conceivable terrain, temperature and physical condition around the clock. I don’t really mind pain or discomfort. Really. I can do one sport just fine. A triathlon though, mind you, is three of them in a row.

A therein lies the problem. I’m an OK runner: there’s ground, feet, air and all the things that make my terrestrial soul feel natural. Cycling, no worries. Swimming, on the other hand, is the most un-natural activity I can think of. Born in Minnesota, you’d think it would be second nature, but it’s not. I gyrated toward frozen water sports, like skiing. I loved sailing, but the only reason to swim was if you screwed up and dumped the boat and the goal was to get back to it ASAP. Swimming for the sake of swimming was not my bag.

To prove to my wife that I was at least partially engaged in this endeavor, I went to the pool to attempt “lap swimming”. This entails getting up at some obscenely early hour and undressing with other old guys and then crowding into 80 degree pool water and trying to swim back and forth in a thin corridor between sharp plastic lines for an hour. Our local pool is only about 20 meters long, so that means an hour or more of constant thrashing, gasping for air and reaching both feet and hands for some solid surface. While Carrie would glide effortlessly and click off 100 laps, I could barely make one before I would simply run out of of air. 20 meters. After the third trip to the pool I gave up. This was early June.

Running was easier. We did the 5km Jingle Bell Run in 30 degree temperatures in Seattle on icy roads. In May we ran the 10 km Deer Run on Indian Island. I did one more training run with Carrie in Long Beach for another 4 miles. Enough of that. Running is just not as efficient as cycling.

And now, here I am, already gasping for air and we haven’t even started yet. The horn blows and everyone around me easily moves through the water and the gap to everyone else widens rapidly. I see the big orange buoy marking the first turn of the triangle we are to swim around. 50 meters out I realize this is not where I should be. I have made a huge mistake. What was I thinking?? I need to quit now so I can at least make it back to shore without waving my arms in what the organizer said would be the proper sign of panic in the water. I am an idiot!

As all the little bobbing yellow heads moved away there was this calm that literally washed over me. The sun on my face, the chaos far away, and just a hint of panic when I realized that I was DOING THE SWIM. Not being a multi-tasker (and trust me – no one is), I took this as one thing I had to do. Now. Nothing else. I just had to swim to that big orange ball. That’s all. I couldn’t do the crawl, that much I knew. It was the thing that exhausted me in the pool. So I cherry-picked. Pick the cherry and put it in the basket (also known as the side-stroke). Carrie’s girlfriend and tri buddy Laura had told me about this – she had done it in her first tri. So that’s what I did. And man, I picked a lot of cherries over the next 35 minutes.

Should this have been embarrassing? It should, if I weren’t constantly fearing for my life. For thirty-five minutes I knew that if I stopped moving I would drown. My heart was racing and I was trying to keep it under control. Little cramps were starting in my legs. And I was still unknown minutes from the first big orange ball.

I knew I was slow. I know what being in the back of the pack can feel like. And having also been at the front of the pack, it was even more evident. But who was I racing against? Being my first triathlon, I hadn’t the slightest idea what it would be like. The last time I swam this far I was between a pontoon boat and the shore and I could touch the bottom.

One down, one to go. The second big orange ball was now the target. I rolled onto my back and just scooted like a upside-down frog. I could rest my legs and arms and the buoyant wet suit top allowed some rest. I cherry-picked my way around the second buoy and was onto the the final leg. A swarm of volunteer kayakers converged on me, shouting encouragement, alignment coordinates and distance to salvation. “60 yards. 50, 40, 30…” I knew they were thinking that I might actually make it and they wouldn’t have to engage their water rescue training. In my head I just wanted to not die before the end. A simple concern. When my foot touched solid ground I was ecstatic. So were they. I was the last one in.

The guy who had marked me earlier with my number using a a magic-marker, now stood with my “T1” (the transition between the swim and the bike) bag for the bike leg. I had foolishly left my dry t-shirt at “T2” (the transition between the bike and the run) so had to go bare or stay wet. Decided to leave the wet suit top on and just ride. I was the last bike out and the volunteers were already tearing down the racks and rolling up the flags.

The bike leg was uneventful and short, so I was simply trying to eat and drink before the run. Only one short steep hill per lap and the rest was wonderful. Volunteers were out in force, making sure we were on course and safe.

I reached T2 and nearly toppled over from not getting out of the pedals, but managed to save myself in time. I jogged to my spot and then wrestled my wet suit top off and into a nice dry t-shirt. Then I started to run, or rather shuffle purposefully up the little rise from the park leading to the trail. Having never done a transition of any sort, I found out what had been mentioned as “the brick” or making your body do something different when it would rather just keep doing what it was doing. I had to focus on getting up a stride of some sort, while other racers slipped past in increasing numbers. Of course, as I was already about as far back in the pack as possible, in a short time there would be no one passing me except volunteers cleaning up the course. 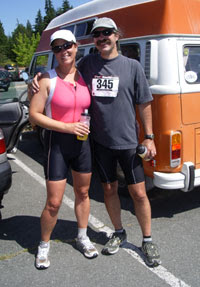 About a mile further I felt better and started to revel in the fact that I would finish! Amazing how only 2 hours ago I thought I’d be washing up on the beach like so much flotsam, but now I was only a few miles from the end. Those three training runs between November and July were really coming in handy now! I began passing a few folks and being friendly, getting water and feeling pretty smug. I ordered a margarita and 2 fish tacos at the 2nd water stop, but the volunteers just figured I was delirious.

Folks that had already finished were heading home in their cars and they waved at those of us still coming in, and that was nice. As I crested the last roller and onto the grass my daughter and her friend gave a welcome cheer and ran in to the finish line with me. I was happy to be finished after nearly 2.5 hours, now thirsty, very hungry and still reveling in having made it out of the lake.

Not sure another triathlon is on my calendar anytime soon, but for a first one, the Whidbey Island Tri was fun, challenging and despite my better judgement, not a bad way to spend a morning!